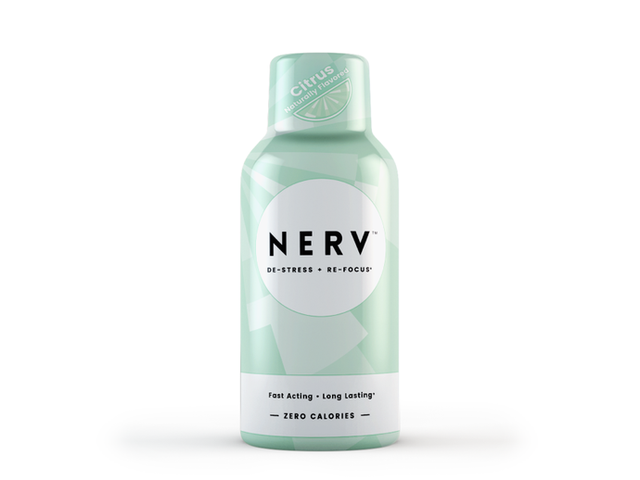 On Friday night, I tried a commercial relaxant/dietary supplement called "Nerv", which I obtained as a gift from Michael Jiang, a young entrepreneur who visited Emory a couple weeks ago.

Jiang, a former Emory graduate student in the Neuroscience program, spoke at a Neuroethics seminar about how he came up with the idea for Nerv. It was intended to occupy the space somewhere between an alcoholic drink and a cup of chamomile tea, he said.

Coffee, sodas and other drinks containing caffeine are common consumer products. Similarly, many college students and young people are used to the idea of taking stronger stimulants as study aids or temporary performance boosters. Often diverted from prescriptions to people with ADHD diagnoses, methylphenidate and amphetamines are available to those determined to get them. This recent Nature article and the Netflix documentary Take Your Pills explore the topic.

For the opposite purpose of stimulants, when it comes time to take the edge off and relax, Jiang said he wanted to create something relatively accessible like coffee. Prescription medications such as Xanax have undoubtedly strong effects, but they create the risk of dependence. Alcohol is also widely available, although for children, not legally.

In contrast, Jiang seemed to be aiming for a product that was gentler, self-limiting and thus less risky. Now that I know more about the precise components of his concotion, I am not so sure about whether that is achievable. He was coy during his talk, mentioning only a dietary supplement that is a GABA-B agonist. Nerv's website is clear about what this is: phenibut. The blog Science-Based Medicine has a round-up of information floating around on phenibut. Just this year, the Australian government designated it as a controlled substance.

When Jiang said GABA, it grabbed my attention immediately. I have been taking a deep dive into GABA neurobiology as part of The Woman Who Couldn't Wake Up. Benzodiazepines such as Valium and Xanax, as well as sleep aids such as Ambien, target GABA-A receptors. Other examples of GABA-B agonists are the muscle relaxant baclofen and (possibly) the highly controlled sleep aid sodium oxybate.

On Friday, I was concerned that if I did take something with a mild relaxant/depressant effect, it would make me sleepy or groggy, so I waited until a quiet time in the evening. I was simply watching a movie after the rest of my family had gone to bed. Jiang mentioned that the active ingredient by itself has an unpleasant taste, which he has to cover up with a citrus flavor. In the drink, the underlying medicinal taste was noticeable but not off-putting.

It was an uncontrolled, single subject experiment. Nerv didn't make me sleepy enough that I was dropping off while watching the movie (Roger Dodger). I did feel relaxed – similar to what I feel a few hours after I take ibuprofen for a headache and the anti-inflammatory effect lasts after the headache disappears. However, there may have been a placebo effect as well.

I wish Jiang well. It was amusing to hear him discuss his plans after his talk with a retired cancer researcher, who insisted that randomized controlled trials were necessary before he could make any claims about the effects of his drink.

While she would be correct if Nerv was being developed as a drug for FDA approval, dietary supplement marketers can and do make vague claims, sometimes referring to preclinical research for back-up. Jiang said he was not comfortable with the role of huckster, but the dietary supplement path he has chosen allows him more flexibility. He said he wanted to conduct larger studies someday, and he needs to get his business off the ground first.

Nerv reminded me of the sleep enhancement devices now being sold by Dreem and Philips, which I wrote about for Proto earlier this year. Those devices have substantial research on the acoustic enhancement of slow wave sleep behind them, but at this point, all their manufacturers can do is subtly present that research without asserting that the devices will address specific medical complaints. They are, right now, fancy brain toys for sleep aficionados.