Notes on Mercies in Disguise and prion biology 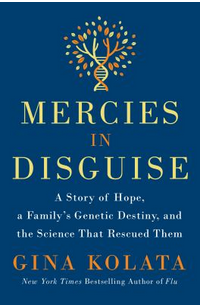 Mercies in Disguise, by New York Times science reporter Gina Kolata, is a compelling look at a family from South Carolina, some of whose members have GSS, a rare inherited neurodegenerative disease. The central issue driving the book is: if an inherited disease runs in your family, would you find out your genetic status before the disease begins to affect you?

In her book, Kolata interposes some chapters about the discovery of prions and the research of Nobel Prize winners Carleton Gajdusek and Stanley Prusiner. Prions are, briefly, aggregates of warped proteins. They seduce other proteins with a similar makeup into taking the same warped 3D shape. The aggregates are infectious and toxic, and are thought to drive rare neurodegenerative diseases like GSS (Gerstmann-Sträussler-Scheinker) as well as playing a role in more common ones like Alzheimer's and Parkinson's.

I think that the story of Mercies in Disguise does not really hinge upon prion biology. In terms of decision-making and genetic tests now available to affected families, GSS could be some other inherited disease. It does not need to be a prion disease. Pre-implantation genetic diagnosis with exclusion testing has been performed for Huntington's disease, for example, since 2002.

The uncertainty comes when a younger person in an affected family don't know their status. Throughout half of the book, Amanda Baxley doesn't know what fate holds for her. The probability of inheritance, if one of your parents had the disease, are straightforward: 50 percent. It's a Mendelian disorder, meaning just one gene is involved. Compare this to Alzheimer's or inherited breast cancer, in which the picture is more complicated. In any case, because of advances in genetics and reproductive biology, Amanda Baxley has the option of PGD-IVF. Some relatives before her did not.

Conservative Christians may sometimes feel that writers at the New York Times treat their views with contempt. However, I think that Kolata treats the concerns of Baxley family members with respect. For example, the central character's mother suggested the book's title, a reference to the song "Blessings" by Laura Story, which asks "What if trials of this life are your mercies in disguise?" Another of the Baxleys, Holly, is called upon to represent the conservative Christian world view:

Holly was married and had a son when she learned her father had GSS, but she and her husband decided that Holly's risk of getting ill herself and of passing on the gene was not going to deter them from having more children. Soon after, she got pregnant and gave birth to another son. The looming GSS threat was not Holly's focus; she would not let it be. She saw getting past her fears and her desire to control her fate as a test of her faith. Instead of dwelling on the uncertainty of GSS, she would concentrate on her children's relationship with God, on their eternal life. "Hope and knowledge are mutually exclusive in this situation," she declared with fixed certainty. "While I don't know, I have hope."

Kolata said that she learned from writing the book that "glib assumptions about people's motivations are often incomplete."

What set the ball rolling for the February 2014 New York Times story was a call from Duke, alerting Kolata to the first person to get PGD and IVF for a prion disease. A brief JAMA Neurology case report was published soon after that time. (Presymptomatic genetic diagnosis was reported in 1991.) The news story got more than 400 comments; an agent called her and prodded her to think about a book about the family. She noted that an editor told her to write like a novelist, and she hadn't written a book like that before. It made her ask the Baxleys lots of detail-oriented questions so that she could reconstruct scenes for readers, she said. She was grateful to the Baxleys, because she was asking them to "relive awful times." Also, in the acknowledgements, Kolata thanks a friend who told her that her prologue gave too much away.

GSS, fatal familial insomnia (FFI) and familial Creutzfeldt-Jakob disease (CJD) are caused by mutations in the same gene, which was identified in the early 1990s. Kolata's book does not deal with the last two decades of research since the identification of the prion precursor gene, and stops with Gajdusek, Prusiner, and Karen Hsiao. For example, it does not touch on how the prion protein interacts with troublemakers in both Alzheimer's (amyloid beta) and Parkinson's (alpha-synuclein), possibly mediating cognitive impairment. It does not deal with more adventurous theories, such as Susan Lindquist's ideas about how misfolded proteins and chaperonse are storehouses for evolutionary variation or Eric Kandel's proposals that prion-like proteins maintain long-term memories.

After her talk at the Decatur Book Festival, I asked Kolata whether she read DT Max's book The Family that Couldn't Sleep, which is about the discovery of FFI as well as the evolution of the idea of prions. She said no. It'd be like reading the Washington Post's version of a story before writing her own, she said. In contrast, she said that she did use some material from Prusiner's memoir, because she did not talk with him directly.

In The Family that Couldn't Sleep, prions hold the book together. His example is more instructive for me than Kolata's, because my book deals with various unrelated sleepy people, but scientific questions are what connect all my chapters. For me, there is not one family whose story is woven through everything, even if Anna Sumner plays a catalytic role at the beginning.

The recent flowering of prion science was perhaps beyond the scope of Mercies in Disguise. Still, in her talk, Kolata seemed to indicate that the connection between prions and more common neurodegenerative diseases like Alzheimer's was tenuous. So I consulted Emory neurologist Lary Walker, who was also listening.

"The basic mechanism of prion spread is pretty well accepted," he said. "But the idea that other diseases involve prion-like processes is still controversial, even though a lot of evidence has built up, In my view, it contributes to virtually every age-related neurodegenerative disease."

Walker showed me slides of brain tissue from GSS patients, in which amyloid plaques looked like Alzheimer's. Then he showed me slides from CJD, with large spongy vacuoles, but without lots of plaques. I was amazed that there was such a big contrast, when the diseases are so close to each other in genetic origin. There must be differences in how brain cells handle the toxic proteins, or the speed at which cells are killed.