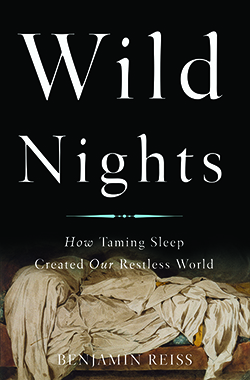 There's a consensus that electricity and later computers altered the way in which we sleep in Western countries – Reiss' book in turn illuminates how to think about that change, reexamining work by authors such as Henry David Thoreau.

Reiss is currently chair of English department at Emory and also co-director of the Disability Studies Initiative. He plays violin and used to play pickup basketball. He previously taught at Tulane in New Orleans, and his family evacuated at the time of Hurricane Katrina. The experience made him think in a different way about our society's expectations about sleep.

Reiss got started with his interest in sleep when he was researching one of his previous books, about asylums and their role as cultural centers in the 19th century. He ran across the story of Jane Rider, a 19 year old servant for a well off family in Springfield, Massachusetts. In 1833, Ms Rider began to experience migraine-like symptoms and then sleepwalking.

During her night time excursions, Rider performed tasks such as sorting clothes, sewing and cooking, with her eyes closed. She became a local attraction because of her supposedly clairvoyant abilities. Rider was eventually committed against her wishes to the State Lunatic Asylum. [That is what it was called then.] Reiss goes into greater detail about Rider in Wild Nights: How Taming Sleep Created Our Restless World.